To wrap up with the series of articles on the localization into FIGS of Snack World: Dungeon Crawl, we asked our French team to comment on some of their glossary choices and how did they come up with the different ideas. We hope you enjoyed this four course meal so… bon appétit! 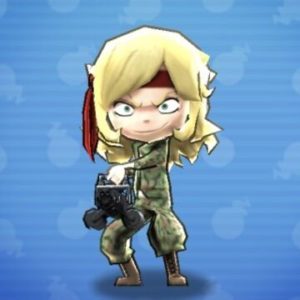 For Alfredo and Penne, we chose Basile and Olivia. Basile is a French first name and sounds like ‘basilic’ (basil), an ingredient in the pesto, an Italian sauce. Olivia for olive/olive oil, it’s a real name too and goes well with Basile.

In French, the Genies are named Génial trio. Génial (awesome/amazing in EN) is a derivative of ‘génie’ (genie in EN), and trio is the noun for a group of three. We liked the name because it sounds like a band/boys band; The three genies look smug and tough, so it only felt logical their name would sound catchy and lean towards cockiness/confidence. French grammar would normally dictate that it should read ‘Trio génial’ (noun first, adjective next), but inverting the words can be a figure of speech to emphasize part of the expression (in this case, ‘génial’). So in English: Trio amazing (inverted from Amazing trio [doesn’t work as good in EN as in FR]). 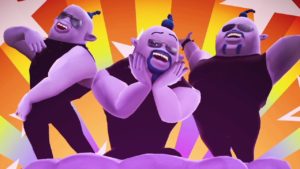 Balsam became Riziv. Riziv is reverse for ‘vizir’ (vizier in EN, a sort of minister in Middle East). Riziv not only sounds nice but also bears the word ‘riz’ (rice in EN), keeping consistency with the food theme and matching the sultan’s name, since ‘rice vinegar’ is a kind of vinegar). We also wanted to keep a hierarchy between the two characters since Riziv is the Sultan’s subordinate.

For monster names, we mostly used play on words and portmanteau words based on their visuals and descriptions. Here are some examples: épouvanteuil (scare chair in EN) is épouvante (terror) + fauteuil (armchair); narcisselfe (selfie in EN) is narcissique (narcissist) + elfe (elf); coqureuil (chanticateer in EN) is coq (rooster) + écureuil (squirrel); Fourmickaël (Anthony in EN) and Fourmicheline (Cleopantra in EN) are fourmi (ant) + proper names Mickaël and Micheline; batrassassin (ninjumper in EN) is batracien (batrachian) + assassin, etc. Every team member suggested their ideas so we had several ideas per monster. We did meetings to discuss our suggestions and choose the final names.