Snack World is one of the tastiest projects we’ve had the luxury of working on, so we asked our team of translators to collect some juicy stories to share with the world. For starters, we recommend you this nice compilation of hand-picked examples from the German team. Mahlzeit!

While working on Snack World it quickly became obvious that the English translation was at times just not appropriate to a German audience: It contained a staggering amount of cultural references that would be lost to Germans ­– especially to German kids. Together with Native Prime, the translators decided to include a JAP > GER translator in the team who also has extensively travelled and lived in Japan to provide us with more Japanese context. 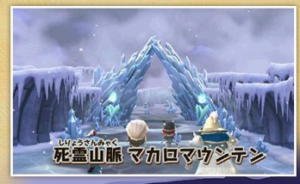 This translation was about an icy region in the game, while the English translation referred to a French pastry which has only recently become more well-known in Germany. We therefore gave it quite a big amount of thought how to incorporate the overall food theme in the theme of the level while finding something appropriate in German. After almost a dozen iterations (including the literal translations from Japanese and English), we settled on «Pückler-Gebirge» which refers to a famous German gelato-dish: Fürst-Pückler-Eis, commonly called Neapolitan in English.

«Kingdom of Tutti-Frutti» is definitely a good translation in English and very appropriate for Snack World, but for German it was a no-go. «Tutti-Frutti» in Germany is commonly associated with a lewd and exploitative gameshow.

We had to come up with something else and decided on using «Croquetta» to strengthen the food-theme; one of the reasons we used the Spanish spelling of «Kroketten» was that it sounds a tad more exotic and more like a place name than the German version.

However, leaving behind the fruit-theme caused a cascade of other names that had to be adapted. One of them was «Chancellor Carambola» («carambola» being an alternate name of the starfruit). Since he is a bit of a show-off, we used «Windbeutel«, referring to a very common German pastry as well as to him being a «windbag» (which is also the literal translation of the German word).

The English version referred to a fruit sorbet, so an appropriate and literal translation would have been «Fruchtsorbär», but while discussing the translation it turned out that this monster was a reference to a very famous Japanese dessert.

This dish is a bowl of ice cream with a lot of fruit on top. As gelato-dishes are pretty popular in Germany that was a great opportunity to combine «Eisbecher» (i.e., German for a generic Gelato dish) and «Eisbär» (i.e., German for polar bear). The chance to transfer the full cultural meaning from the Japanese original to German as well as the nice sound of the alliteration makes «Eisbecherbär» probably my favorite translation in the game.

Ole Christiansen has been working as a translator for more than 20 years. Starting off in the roleplaying industry, he has written a number of books with his partner before moving onto literary and game translation. Since then he has contributed to games such as Fallout: New Vegas, Elder Scrolls Online, the latest titles in the Far Cry and Assassin’s Creed series, as well Hitman 2 and Snack World. Ole has a master’s degree in English and German and three little rug-rats who grow up bilingually in beautiful Hamburg, Germany.